So today is Christmas. Yes, I am writing this on the actual day. I didn’t prepare it in advance and just press send. That’s how much I love you all. All together now – aaaaahhhhh!

In Christmases gone by there was a routine and I think that perhaps this loss of routine this year is what has made me feel so un-festive, except that being totally honest, now the big day is here, I have shaken off all my grinch-like tendencies in favour of having a lovely day with wonderful people.

When I was little, my brother and I would leave out the obligatory treat for Santa, usually a mince pie* or similar, an alcoholic beverage and carrots and water for the reindeer. Then we’d go to bed leaving our stockings at our bedroom doors and, I can’t speak for him, but it would take me hours to go to sleep. That is quite something as I’ve always been a head-hits-the-pillow-and-sleep-comes-in-two-seconds sort of a girl. My father always said I could sleep on a chicken’s lip. In the morning, we’d be awake unfashionably early (remember I’m an owl) and we’d literally run through to our parents’ room with our stockings, now overflowing. We’d all get into bed together and unwrap the stocking presents right there. I believe this was a conventional double bed, not a queen, king or super-king or something even bigger that the likes of Elton John have custom made and yet we’d all be crammed in – and in later years there was our sister as well!

Eventually, my dad would go downstairs, on his own, to check that Father Christmas had been and also that he had left because of course children are not allowed to see him. This was an absolutely critical stage in the proceedings. He’d also put the kettle on of course as neither he nor my mother can properly wake up without a cup of tea. He would then shout up the stairs and it would be safe for us to go down. There were always presents aplenty, arranged in neat piles, my brother’s at one end of the settee and mine at the other. When we had a new sibling, she had the armchair. My mother was always strict that we opened them one at a time so it was not too chaotic and everyone had chance to digest and appreciate what had been bought and received. Then it was breakfast, followed by a visit to one set of grandparents while my mother cooked lunch, possibly calling in on our Auntie Sylvia on the way home. The other set of grandparents joined us for lunch, there’d be more presents and then time to enjoy what had been bought. Of course this all took place in the northern hemisphere. It’s hilarious that here in the south everyone assumes that the UK Christmas is usually, if not always, a white one. They’ve been watching too many movies. I only remember one white Christmas in 48 years and that was only in 2010 when I went back to the UK from New Zealand for Christmas. In reality it would be grey and miserable so Christmas was an indoors activity. People are often quite sentimental about a cold Christmas but I have no desperate yearnings to return to those days. I am perfectly happy to spend the day outside in the sunshine although some stuffing and Christmas pudding remain obligatory and slip down very nicely thank you very much.

This year, things were as far removed from this routine as possible. I woke up home alone, vaguely thinking of shaking my bones to get out of bed and get ready for work when I had a FaceTime call from the UK family. How technology has come on from the Christmases of yesteryear and isn’t it just wonderful that you can now sort of join in the activities on the other side of the world? Even better that my nephews don’t forget what I look like and vice versa.

Then it was off to work which was surprisingly fine. As much as I don’t like working Christmas Day, I have to just remind myself how awful it must be to be a patient in hospital on Christmas Day. When I was a young trainee, I worked for a consultant whom I knew would not come to the ward on Christmas Day and so I felt safe to send one of my favourite patients on leave for the day. He lived locally but had been in hospital for months. Little did I know that one of the other consultants planned to come in especially to see him, with a present, as he was a favourite of hers too. She enquired as to where he was. I very nervously said I’d sent him out for the day. I thought she would be a bit annoyed as it hadn’t exactly been discussed. But no, she was delighted and we sat and mused about how lovely it was that he had been well enough to go. When he returned, he brought me a chocolate bar from his selection box to say thank you. That was one of the best Christmas presents I’ve ever received but even better that he was beyond happy that he and his family had spent the most wonderful day at home. In the end, he did well and I think about him every Christmas and hope that he is still in good health.

This year, all the patients are too young to know that it is Christmas Day and they won’t remember anything about it so that is something to be truly thankful for. One family had gone all out in bringing Christmas to their child with about 15 relatives, a Christmas tree with presents underneath and a full scale buffet feast in his room. There was barely enough room for him! The weird thing is that these families always go to great trouble to wish the staff a Merry Christmas and they always appear so grateful which just seems wrong.

I was just preparing to leave work when I got wind of the most amazing fact: the coffee cart at work was open! On Christmas Day. I know it’s a special day and all that, but you can’t let the caffeine levels become too depleted or the grinch-like state is totally unshakeable. So, caffeinated and feeling much more lively, I went to visit my friend who has been unwell. I was really pleased for her that her Welsh family have come over for Christmas and that they’ll have a lovely time altogether. She has bought me a present suitable for cycling which I can’t wait to wear. I’ll be sure to take a selfie or make a video when I sport it. I had a day off cycling today but will be back at it tomorrow. My Christmas Eve cycle ride was just lovely. Do watch the video as it explains all about my festive knees, which I got my friend to photograph as I knew they would be appreciated…

I later went to some other friends for lunch. There were 7 adults and 2 children, both of whom love their auntie which is just so sweet. One of them even had his birthday today too! One of the great privileges of being an auntie is being able to spoil the children, not necessarily in a material sense but being able to do things with them that they are not normally allowed to do, even if it is just allowing them to stretch the boundaries a little. So when I was in the toy shop and I had their parents’ voices in my head saying “please don’t get them a drum kit”, I couldn’t resist the temptation to both oblige and be a bit naughty and so it was percussion instruments all round. And what fun we had!

Now I’m waiting for the UK family to FaceTime again with details of the Secret Santa gifts and I am just about to open mine. Even the Queen mentioned the marvels of modern day technology in her Christmas broadcast. I do hope you enjoy my Christmas message. As I am sat here with a very small glass of something nice, I feel I must recommend it to you as it is totally divine. It is Lewis Road Creamery Chocolate Cream Liqueur. Buy it. You will not be disappointed… And anyone coming through Duty Free any time soon, yes please, I need a top up!

The last few days I’ve been trying to think which is my favourite Christmas tune. Due to procrastination, I can’t settle on a single jingle. But, I will leave you with a contender.

I want to wish you a Merry Christmas

I want to wish you a Merry Christmas

I want to wish you a Merry Christmas, from the bottom of my heart 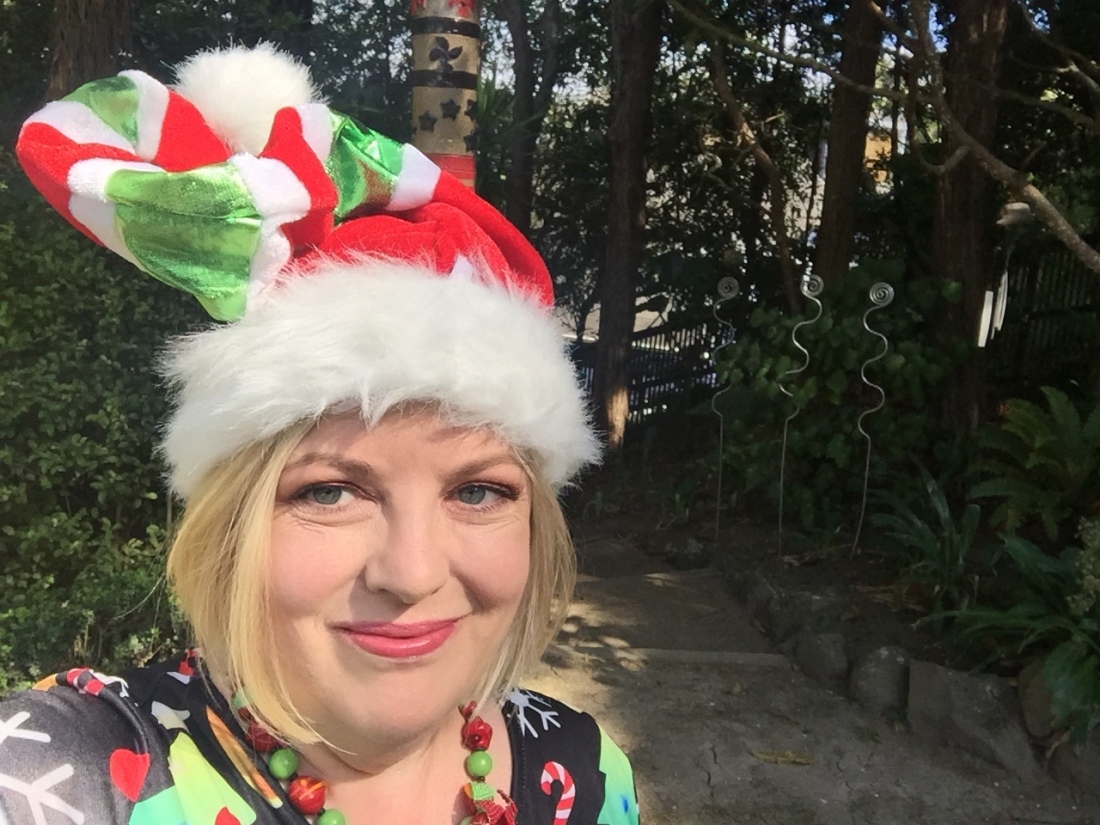 *In New Zealand, a mince pie would usually be made of mince meat. A mince pie made of dried fruit needs to be prefaced with Christmas to avoid confusion…!