Today we cycled late in the day as the morning was taken up learning about all things related to herbs and spices with a lovely tour of a spice garden. The guide was really knowledgeable and a qualified herbalist (whatever one of those is) and clearly very compelling as my fellow cyclists seemed to buy up large in the shop at the end (although I never did establish if anyone bought his much recommended aphrodisiac).

The qualified herbalist explaining his wares

Control those emissions with this alleged aphrodisiac

We also all got a back, neck and shoulders massage, or at least, as much of these things that could be accessed with your clothes still on. This had to have been the most pummelling massage I’ve ever experienced and very welcome, although if I’m picky it would have been all the more so at the end of a cycling day rather than in advance.

This was followed by the much heralded coconut scraping competition. Who would have imagined it could be so difficult and I came a clear last with my basket only sporting a very meagre offering of the white stuff? The prizes were tea towels and nowhere near as cute as the tea cosies from the tea picking contest so I was pleased not to have to bulk out my luggage any further. 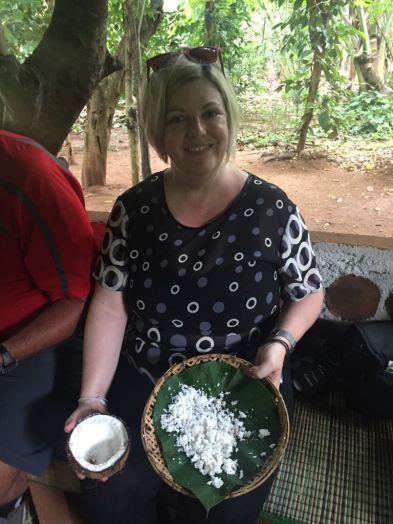 The meagre results of my ineffectual coconut scraping, as evidenced by my coconut still sporting most of its flesh

The winners of the coconut scraping contest – clearly people with more muscle than me!

We had a brief demonstration of things that can be made with a coconut, including the ubiquitous coconut sambal and these strange deep-fried snacks made out of coconut milk and rice flour. They were crispy, but otherwise fairly tasteless, but I do feel bad confessing this opinion as they were quite labour-intense.

After yet another buffet, this one of higher calibre than some others we’ve experienced, we all thought we’d be off cycling. Alas no! Now we were off to some rock temples. This involved us all buying sarongs on the way. I’m not sure why as some of us already had our arms and legs covered but it was decided we should get matching ones for the photo opps and I must say, they did seem to add a certain je ne sais quoi, even if we improvised with a few metres of the very cheapest pink fabric cut into seven pieces. I had a slight and unjustified grumpiness about climbing 500 steps in the heat of the day without having been forewarned but the temples were impressive and I was pleased I pulled myself together.

The cycling at last commenced on back roads along the side of a river and we saw many children bathing in the river, one girl even attempting to run across water from the other side the get to us to say hello. There were also animals including monitor lizards and it was generally very pleasant until the rain set in. And by rain, I mean an absolute deluge. The conditions became ever more difficult and us ever more soaked through and then group separation occurred with the quickest cyclists trying to get to the hotel faster only to become separated yet further such that when our slow group turned up, only one of the other cyclists had made it. Cue much agitation about the missing cyclists and frantic setting off back down the road by the cycle guide and driver-guide but all was eventually fine and we were all reunited. This hotel was also the best of the trip – lovely big rooms set in lush gardens in the countryside – except that this buffet was so huge it was all very coach trip-holiday camp-esque and not terribly authentic. Still, the wine choice was extensive and the beer cold – just what was needed after such an eventful day.